I don't think we who have not been in military combat have much notion of what a war is like. Private Peaceful is a very powerful story. We in America seem to have the belief that Vietnam was a uniquely horrific war experience, that other wars were somehow "purer" wars. I don't think a person could read this book and continue to think so.

I grew up in the sixties, a time of hope and optimism about the world. I had expected that by this century people would have developed ways to solve conflict without resorting to sending young people to kill other young people.

I wonder if the stories of war, however brilliantly written, are not always much less horrific than actual combat....

And for anyone who enjoyed Private Peaceful and wants to read more, I suggest The Things They Carried.

How often do you go out to your mailbox and find a package has arrived from Kathmandu, Nepal?! 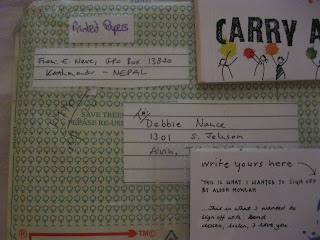 That happened to me this week. Inside the package was the delightful sliver of a book, Carry a Poem. Thousands of free copies of this book were given away in Edinburgh, Scotland during the Carry a Book Project, to “get you reading poetry.” I received it in a bookring through BookCrossing. The book consists of about twenty stories of people and the poems they love. Many of my favorites are here: “Warning” (perhaps better recognized by its opening line: “When I am an old woman I shall wear purple”), an e. e. cummings (“i carry your heart with me”), and even the poem I’d considered adding to the card file accompanying the book, “Sunlight in the Garden”.

I decided to go with a beloved poem, “Orange”. I include it here:

The Orange by Wendy Cope

At lunchtime I bought a huge orange —
The size of it made us all laugh.
I peeled and shared it with Robert and Dave —
They got quarters and I had a half.

And that orange, it made me so happy,
As ordinary things often do
Just lately. The shopping. A walk in the park.
This is peace and contentment. It’s new.

The rest of the day was quite easy.
I did all the jobs on my list
And enjoyed them and had some time over.
I love you. I’m glad I exist.

I plan to do a Carry a Poem Project of my own at school in the spring.

Hector and the Search for Happiness by François Lelord

I participated this week in the first ever Literary Blog Hop. I visited many blogs.

At almost every blog, bloggers took on the task of defining the word «literary».

Most bloggers were in agreement ; I saw lots of «thoughtful» and many «beautifully written».

Some bloggers felt literary must be, by definition, difficult.

I say no and Hector and the Search for Happiness is a good example.

Hector is a delightfully simple read, but it is nevertheless quite literary. Thoughtful. Wildly clever. Certainly beautifully written.

I must say that I obtained great happiness from reading this book. Definitely simple, however, if that puts you off it.
Posted by Deb Nance at Readerbuzz at 9:28 AM