MAMA NEEDS SOME NEW SHOES
I did it. Late last night, when I was barely awake enough to type the numbers on my credit card, I went online and ordered a new iPad.

Indulgent. I already have a desktop, a large laptop, a medium-sized (pink) laptop, a mini, a Kindle, an iPhone, and an iPad.

But I love technology the way some women love shoes. And I stick to one pair of shoes.

CYBILS ANNOUNCED
Yes, I'm that far behind. The Cybils were announced mid-February. I'm working on a post.

ANDIAMO IN ITALIA!
Incredible as it sounds, it looks very promising for a trip to Italy this summer. Mio marito has gotten his passport. I got a 99 cent app for learning Italian. I went to the bookstore last night and got three books on Italy. We are as good as there.

BOOK REVIEWS
I have an enormous stack of books I've read and have yet to review. I'm working on a post.

DEWEY'S READ-A-THON
I hope to join for Dewey's 24-Hour Read-a-Thon. It will be on Saturday, April 21st. I need to write a post about it. 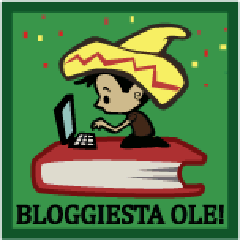 BLOGGIESTA OLE!
Which all brings me to my final odd (or end): the need to blog. Next weekend is Bloggiesta and I plan to blog and blog and blog.

And get caught up on all of these things.

How about you? Will you be bloggiesta-ing next weekend? I hope that you will and that you will stop in and chat about good books or with blogging tips or about Italy even.

Posted by Deb Nance at Readerbuzz at 6:49 AM