It helps, sometimes, to imagine a worse case scenario.

We could have chosen a book character as our leader.

What if, say, the Cat in the Hat had been elected last November? 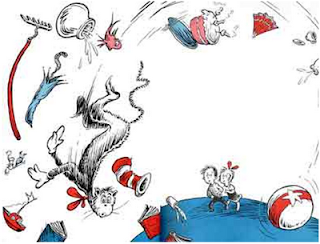 Winnie-the-Pooh has trouble with decisiveness, I think.

Scarlett O'Hara could definitely seize the reins of power, but what then?

What would the country be like if The Little Price was head of state?

We could have chosen Napoleon from Animal Farm. Or the Wizard of Oz.


On the other hand, I can imagine some wonderful book character leaders. Anne Shirley. Charlotte from the famous web. Mary Poppins. Gus McCrea from Lonesome Dove. The Little Engine That Could. Tom Sawyer has a lot of gumption. Atticus Finch. Even the little boy from The Emperor's New Clothes knew how to call a spade a spade. And I definitely like Madeline, though she would have to immigrate. And there's always Gandalf.


Top Ten Tuesday is an original feature/weekly meme created at The Broke and the Bookish. This feature was created because we are particularly fond of lists here at The Broke and the Bookish. We'd love to share our lists with other bookish folks and would LOVE to see your top ten lists.
SaveSaveSaveSave
Posted by Deb Nance at Readerbuzz at 12:01 AM