I'm a sucker for a good romance.
Here are some that I'd recommend,
along with a tiny bit from Amazon. 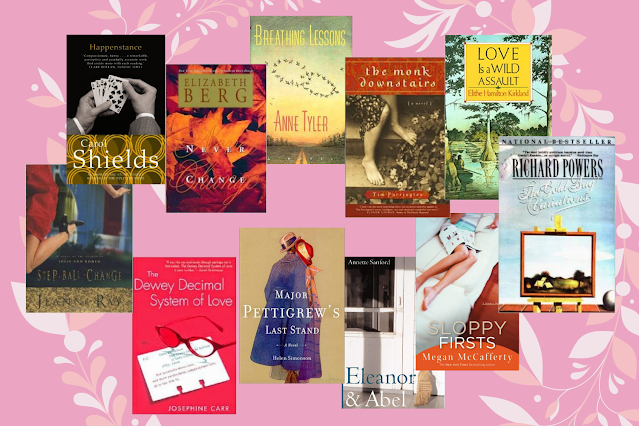 Never Change by Elizabeth Berg
'Middle-aged Myra Lipinsky describes herself as "the one who sat on a folding chair out in the hall with a cigar box on my lap selling tickets to the prom, but never going." And despite a flourishing career as a visiting nurse, she feels as much an also-ran as ever. As the novel begins, in fact, high school seems to be rearing its ugly head again: Chip Reardon, the heartthrob of Myra's youth, has returned to town to live with his parents. Chip is dying from a brain tumor, and Myra becomes his nurse.'

Eleanor & Abel by Annette Sanford
"When a storm tears a hole in Miss Eleanor Bannister's roof, the itinerant carpenter who volunteers to repair it is so capable and charming that he remodels Miss Eleanor's life. A retired schoolteacher in the town where she's always lived, Eleanor, at age sixty-nine, finds the sudden presence of Abel Brown in her life unnerving and unsettling --and after a time, irresistible."

Happenstance by Carol Shields
'This early Eighties chronicle of a marriage is actually two novels in one ("The Wife's Story" and "The Husband's Story") published in a back-to-back format. Over the period of one particularly eventful week, the husband and wife each experience midlife crises.'

The Gold Bug Variations by Richard Powers
"If you don't get the title's allusive pun (to Robbins's Goldberg Variations), you won't get far into this long, densely textured, multi-referential, and brilliant novel. It demands that a reader make connections between such diversities as the genetic code and musical notation, Flemish art and biological nomenclature, the logic of computer systems and the Dewey decimal classification, cartography and chemistry. Making such connections--deciphering the encrypted messages of our world--is the great single quest in this novel of multiple searches. There is a rudimentary plot: a pair of love stories, separated by 25 years, entwined one round the other, but the real story here, its great treasure hunt, is the search to break the code unlocking the secret of life."

The Monk Downstairs by Tim Farrington
The Monk Downstairs follows the beguiling romance between a jaded San Francisco graphic designer and a monk who flips burgers at McDonald's. Rebecca Martin is a 38-year-old single mom who has lost her faith in men; Mike is a disillusioned monk who's lost his faith in God. The two meet just after Mike leaves his monastery of 20 years and rents the downstairs apartment of Rebecca's house."

Breathing Lessons by Anne Tyler
"Taking place on one summer day, when Maggie and Ira drive from Baltimore to Pennsylvania to a funeral, with an accidental detour involving an old black man they pass on the road and a side trip to see their former daughter-in-law and their seven-year-old grandchild, the novel reveals the basic incompatibility of their 28-year marriage and the love that binds them together nonetheless.'

Love is a Wild Assault by Elithe Hamilton Kirkland
"This brilliant novel tells the story of Harriet Potter--the dark-eyed pioneer woman who became a legend during the struggle for Texas independence and who played a dramatic role in the unfolding saga of the new republic."

Major Pettigrew's Last Stand by Helen Simonson
'The Major epitomizes the Englishman with the "stiff upper lip," who clings to traditional values and has tried (in vain) to pass these along to his yuppie son, Roger. The embattled hero discovers an unexpected ally and source of consolation in his neighbor, the Pakistani shopkeeper Jasmina Ali.'

Step-Ball-Change by Jeanne Ray
"Caroline McSwain, a dance instructor in her 60s, is sitting down to dinner with her devoted husband, Tom, a public defender, when two phones ring simultaneously to interrupt their rare moment of privacy. Ten minutes later, her estranged, flighty sister, Taffy, newly separated from her husband, has decided to come from Atlanta for an extended visit, with her nasty terrier in tow. And the McSwains' only daughter, Kay, has just gotten engaged to Trey Bennet, a member of Raleigh's bluest-blooded family, but she still hasn't gotten over Jack, a charming district attorney."

The Dewey Decimal System of Love by Josephine Carr
"After 15 celibate years, librarian Ally Sheffield is in love, and the object of her newfound affections is gorgeous maestro Aleksi Kullio, the latest conductor of the Philadelphia Philharmonic. The choice of which man is really right for Ally may be obvious early on to some readers, but much of the pleasure in this wonderfully amusing novel comes from Carr's realistic depiction of the everyday pleasures and occasional downsides to working in a library; her wonderfully quirky, all too real characters; and her delightfully acerbic prose."

Sloppy Firsts by Megan McCafferty
'Sloppy Firsts is an insightful, true-to-life look at Jessica’s predicament as she embarks on another year of teenage torment--from the dark days of Hope’s departure through her months as a type-A personality turned insomniac to her completely mixed-up feelings about Marcus Flutie, the intelligent and mysterious “Dreg” who works his way into her heart.'


Posted by Deb Nance at Readerbuzz at 5:02 AM