Have you read any of these? All these books are listed in 1001 Children's Books You Must Read Before You Grow Up. All of them are written by French authors (well, except Madeline, but I had to include Madeline, nevertheless, and The Orange Cow and it was published in France.) Are there other childhood favorites for French children that I have missed? 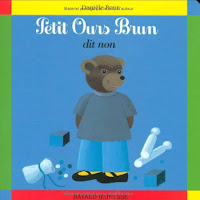 Petit Ours Brun (Little Brown Bear)
Written by Claude Lebrun and illustrated by Daniele Bour
First published in 1975
Ages: 0-3
"Little Brown Bear tells the story of the special moments in the everyday life of a young bear. Living with Mother Bear and Father Bear, he has many exciting adventures, similar to those that mark the life of any toddler." 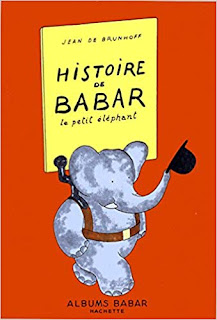 L'Histoire de Babar, le petit éléphant (The Story of Babar)
Written and illustrated by Jean de Brunhoff
First published in 1931
Ages: 3+
"The Story of Babar the Little Elephant begins with Babar's childhood in the forest. When his mother is killed, Babar runs away to the city. There he is befriended by an old lady, who clothes and educates him." 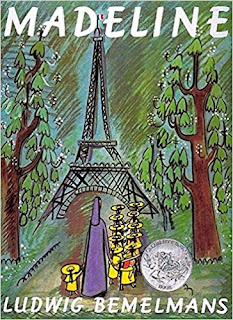 Madeline
Written and illustrated by Ludwig Bemelmans (Austrian, admittedly)
First published in 1939
Ages 3+
"In an old house in Paris, that was covered with vines, lived twelve little girls in two straight lines." 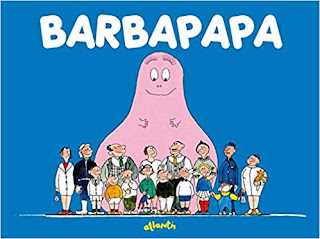 Barbapapa
Written by Annette Tison and illustrated by Talus Taylor
First published in 1970
Ages 3+
"When young François' watering can nurtured to life a pink vegetable-animal called Barbapapa, it also spawned a long-running popular series of books and animated cartoons." 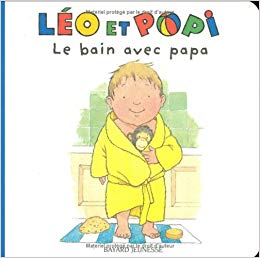 Léo et Popi
Written by Marie-Agnès Gaudrat and illustrated by Helen Oxenbury
First published in 1980
Ages 3+
"Popi is a stuffed monkey, brought to life by the imagination of Léo, his little owner." 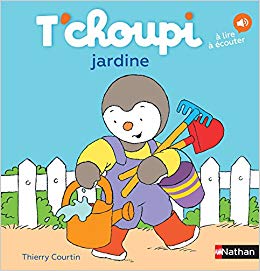 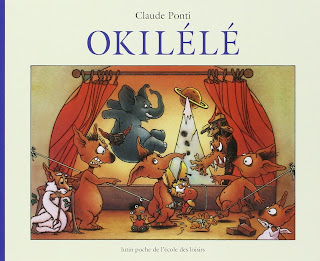 Written and illustrated by Claude Ponti
First published in 1993
Ages 3+
"Okilélé tells the story of a small creature in search of recognition. Okilélé was so named by his family because of his repulsive appearance....Aware of his ugliness, the little creature will do everything in his power to be accepted by his family. But his attempts exasperate his parents, who accuse him of being intrusive." 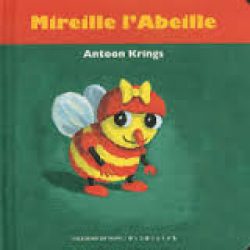 Droles de petites bêtes (Garden of Little Creatures)
Written and illustrated by Antoon Krings
First published in 1994
Ages 3+
"This is a charming collection of stories about little animals---their houses, their unusual life, and their unexpected adventures. The series begins with the story of Mireille l'Abeille, a sweet little bee who works day and night to make lovely honey and golden sweets." 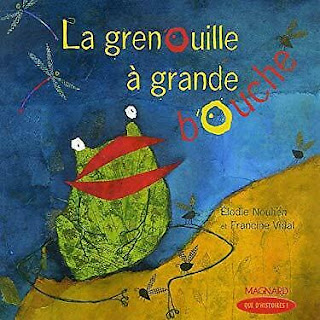 Written by Francine Vidal and illustrated by Élodie Nouhen
First published in 2001
Ages 3+
"The Widemouthed Frog is the story of a very green frog with a large red mouth who lives quietly in a hot country on a water lily. One evening, the frog can no longer bear to swallow flies for every meal, so he decides to go off in search of adventure, and a more varied diet." 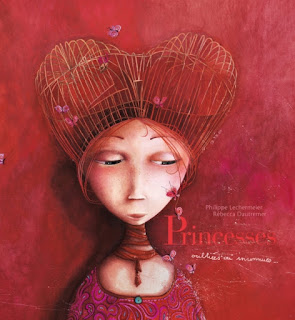 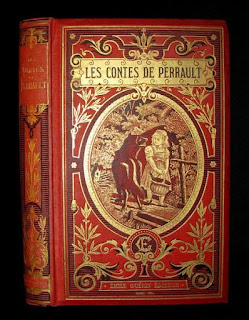 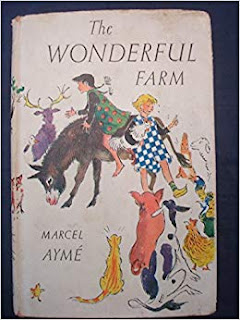 Les contes du chat perché (The Wonderful Farm)
Written by Marcel Aymé and illustrated by Natalie Perain
First published in 1934
Ages 5+
"The stories take place in the heart of rural France where two sisters, Delphine and Marinette, live with their parents on a farm. The family farm is also home to a strange little world of animals who can think for themselves, and who express their thoughts elegantly...." 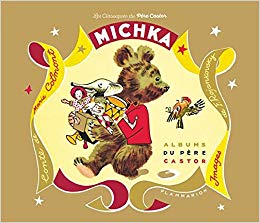 Michka
Written by Marie Colmont and illustrated by Feodor Rojankovsky
First published in 1941
Ages 5+
"Michka tells the story of a little teddy bear and how he discovers freedom, nature, and the world around him, then experiences self-sacrifice." 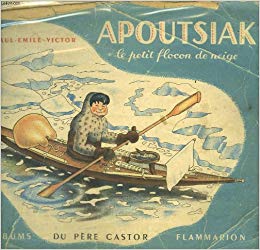 Apoutsiak: le petit flocon neige
Written and illustrated by Paul-Emile Victor
First published in 1948
Ages 5+
"The story recounts the birth, life, and death of Apoutsiak in a land white with snow. As soon as he can walk, Apoutsiak learns to hunt, to train the dogs, and to drive a sled." 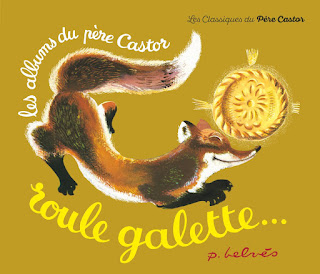 Roule galette
Written by Natha Caputo and illustrated by Pierre Belvès
First published in 1950
Ages 5+
"A man asks his wife to cook him a special cake (a galette). She leaves it to cool on the windowsill. Roule Galette is a cake with a fidgety temperament. She rolls from the window, down onto the grass, and starts her journey through the country." 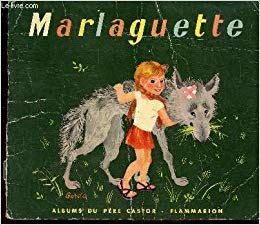 Marlaguette
Written by Marie Colmont and illustrated by Gerda Muller
First published in 1952
Ages 5+
"Marlaguette is a fable of the beautiful friendship that develops between a little girl and a wolf."

Crictor
Written and illustrated by Tomi Ungerer
First published in 1958
Ages 5+
"Crictor is a charming tale that tells of the affection of a boa constrictor for the inhabitants of a small French town." 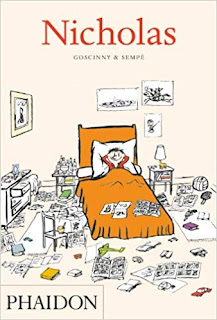 Le petit Nicholas (Little Nicholas)
Written by René Goscinny and illustrated by Jacques Sempé
First published in 1959
Ages 5+
"(Nicholas) is rather average at school but he is surrounded by a happy gang of friends at a time when French schoolboys still wear short trousers and write with penholders and ink pots." 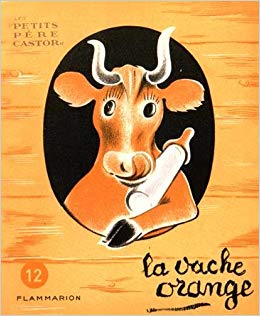 La vache orange (The Orange Cow)
Written by Nathan Hale (American) and illustrated by Lucile Butel (French)
First published in 1961
Ages 5+
"This unusual tale tells the story of an orange cow who is sick and is looked after by a gentle gray fox." 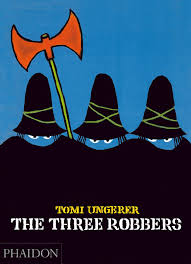 Les trois brigands (The Three Robbers)
Written and illustrated by Tomi Ungerer
First published in 1961
Ages 5+
"The Three Robbers tells the story of three fierce, black-clad robbers who terrorize and plunder the countryside, armed with a blunderbuss, a pepper blower, and a huge red axe…" 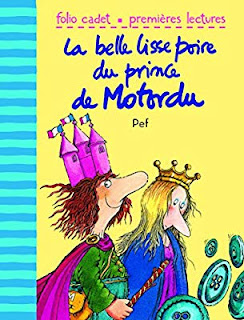 Le belle Lisse poor du prince de Motordu (The Prince of Motordu)
Written and illustrated by Perf
First published in 1980
Ages 5+
"This novel tells of the life of the bizarre little prince---his games, hobbies, and jokes---up to his marriage to the princess Dezécolles and of the adventures of the growing Motordu family thereafter."

Please join the weekly meme at An Accidental Blog. Share with the rest of us your passion for France. Did you read a good book set in France? See a movie? Take a photo in France? Have an adventure? Eat a fabulous meal or even just a pastry? Or if you're in France now, go ahead and lord it over the rest of us. We can take it.

Il est Juillet et il est temps pour le merveilleux Paris in July hosted by Thyme for Tea! (*It is July and it is time for the wonderful Paris in July!)