Classic Book Characters from Moby Dick: Who is Your Favorite?

I've been attempting to read Moby Dick for the very first time this month. Typically, when I read a work of fiction, I find one or more of the characters to be a person I can identify with, a person with whom, were the characters real, I might befriend.

Who do you find most appealing? Vote in the poll below and share your thoughts in the comments.

Here's a little information about each character:

Ishmael
Our protagonist from Moby Dick is a solitary character, spending much of his time moaning about life's difficulties and questioning the meaning of life.

Queequeg
To start, Queequeg has no table manners; he uses his harpoon to pass food around the dinner table. He has some sort of scary tattooing on his face and body. Most off-putting is probably the fact that Queequeg is an acknowledged cannibal.

Father Mapple
An old-time preacher, Father Mapple frightens his congregation of whalers with the cautionary tale of Jonah from the pulpit.

Elijah
Elijah makes a brief appearance in the book, shouting at people preparing to board the whaling ship, warning them of dangers he foresees, prophesying about death and doom.

Captain Bildad and Captain Peleg
These two together finance the trip the ship is taking and choose the crew. They are penny-pinchers and try to stiff the crew members of the profits. Neither goes aboard the vessel themselves. 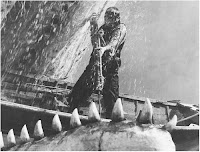 Ahab
The captain of the ship, Ahab, literally does nothing but obsess about ways to destroy the white whale, all the while hobbling back and forth across the deck of the ship with his peg-leg.

Fedallah
The mysterious harpooner Fedallah is referred to as "Ahab's Dark Shadow," and the crew speculates that Fedallah is the devil in man's disguise.

Dough Boy
Dough Boy is the pale, nervous steward on the ship.

Moby Dick himself
Yes, Moby Dick is a whale, but he's not the gentle giant promoted by modern whale-huggers. He's a scarred, angry whale, set on crushing all humanity aboard whaling vessels.


So, who do you find most appealing from Moby Dick? Which of these characters do you find yourself most drawn to? Who is your favorite? Please vote in the poll below and share your thoughts in the comments.