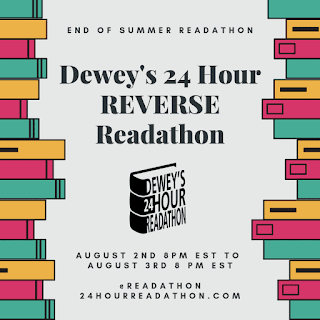 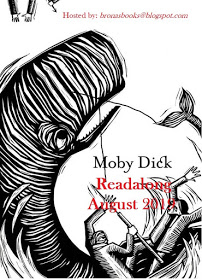 In case you missed it, Brona's Books is holding a Moby Dick Readalong, beginning this month. Here are some useful resources she oh-so-kindly bookmarks for us:


I find summaries of each chapter:
Shmoop Summaries of Moby Dick Chapters
How to Read Moby Dick: A Guide for First-Timers

I check out books from my public library that I also plan to read. I find a children's version of Moby Dick, a comic book of Moby Dick, and a graphic novel of Moby Dick. In addition, I have the true story of Moby Dick, Moby-Dick in Pictures (with a drawing for every page), and Nathaniel Philbrick's Why Read Moby-Dick? 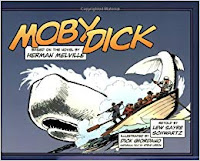 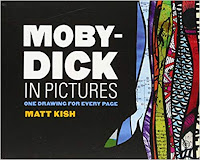 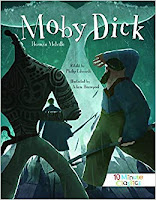 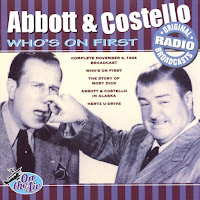 "Then he stabbed him again."

"That poor little mackerel must have been full of holes."

"Yep. He was a holy mackerel."

"Now Moby Dick didn't feel so good so he went to see the doctor fish."

"Yeah, he was a famous sturgeon."

I find three movie versions of Moby Dick on Amazon Prime. I wonder which one is the best. 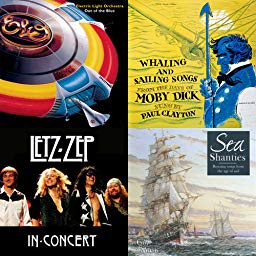 And you just can't have any sort of a readathon without snacks, right? 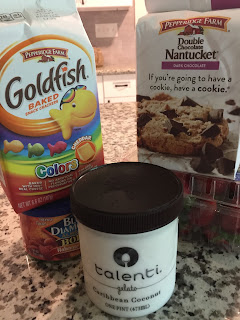 I think I'm set. Do you have any other resources for me? Ideas? Suggestions?

I am simultaneously listening to the podcasts and reading along in Power Moby Dick for Chapters 1-10. The readathon hasn't even started and I'm already 14% through the book. 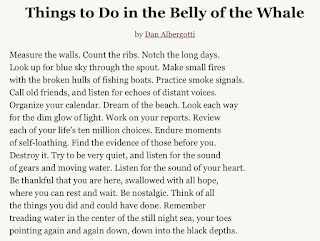 Here's a lovely poem to kick off our Moby Dick: Things to Do in the Belly of a Whale by Dan Albergotti, read aloud starting at 2:50 by Garrison Keillor.

Bryan Waterman has lots of fascinating observations in his Top 5 Bits of Advice for First-Time Readers of Moby Dick.


It's all out there, folks. Someone has apparently copied Melville's library, books filled with his scribbled marginalia. Take a look at that here.

I read along in Power Moby Dick while listening to the podcasts for Chapters 11-16.

1)What fine part of the world are you reading from today? And what time is it where you are?
It's 7 pm, and I'm in Alvin, Texas, along the Gulf Coast.
2) Which book in your stack are you most looking forward to?
The comic book version of Moby Dick. I think I'll read that first.
3) Which snack are you most looking forward to?
The Caribbean coconut gelato.
4) Do you have a #reversereadathon plan of attack?
All things Moby Dick.
5) Are you doing the readathon solo or with others?
Solo AND with others. Oddly. 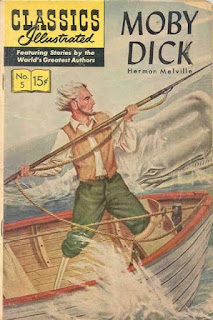 I can now, in all honesty, say that I have read Moby Dick. Well, the comic book version, published at a time a comic book sold for fifteen cents, 1943. Comic book classics plus Cliff Notes is all that got my generation through college English, I think. All in all, not bad.  Forty-eight color pages (reduced from sixty-four, to conserve paper during the war). I especially love seeing Ahab's wildly manic face.

I'm back, listening to my Whale, Whale, Whale podcast while reading the online Power Moby Dick and browsing through the chapter summaries at Shmoop. 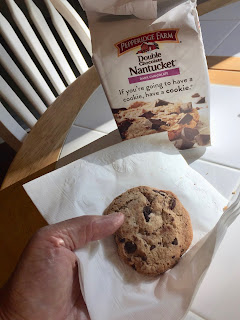 Listening to all of these podcasts has apparently twisted my brain toward the trivial, but I suddenly feel curious to explore the meaning behind the Pepperidge Farm Double Chocolate Nantucket cookies ("If you're going to have a cookie, have a cookie.") Why Nantucket? I wonder. I wasn't able to find out why, but I do find out that Taste of Home ranked the Nantucket #6 of fifteen Pepperidge Farm cookies its taste-testers tried. I also learn that Pepperidge Farm founder Margaret Rudkin began the tradition of naming cookies after cities after a Queen Mary voyage through Europe, and Pepperidge Farm has continued the tradition through their American collection. I like how the ad copy for the Nantucket says, "It's the kind of cookie that's more than a treat, it's an experience!" I'll take that. 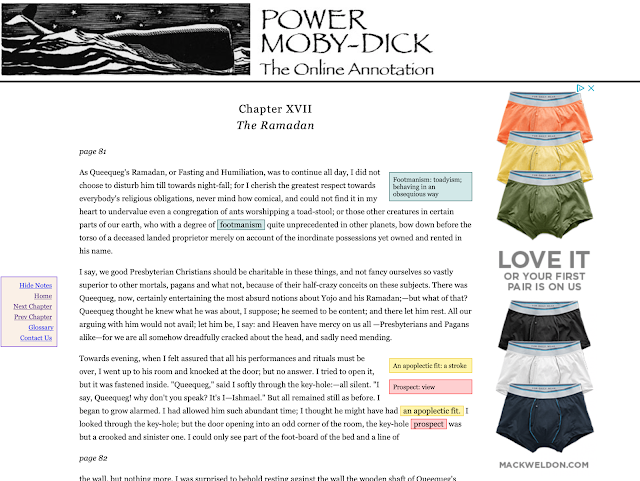 Behance has lovely illustrations of all the Moby Dick characters. Can you guess who this is?

Perfect to glance at this illustration, as I read through Chapters 28 and 29 and the captain at last makes his entrance. From the podcast: "It feels like as soon as the ship is out of the port, this book kicks into twelfth gear." 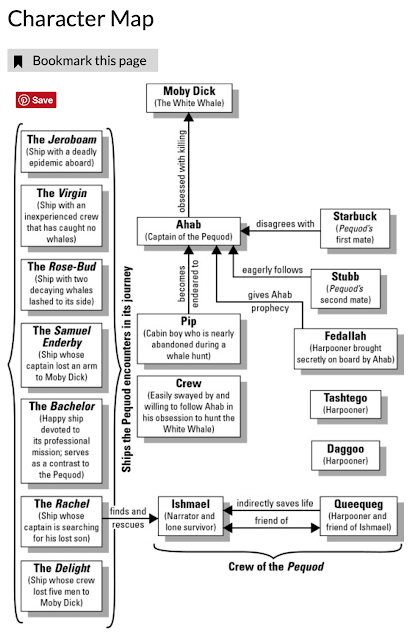 I finish all the Whale, Whale, Whale podcasts (they go up to Chapter 32), and forge on, reading Power Moby-Dick through Chapter 35, 31% on my Kindle. 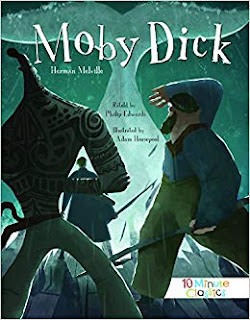 Now I read Moby Dick: 10 Minute Classics, retold by Philip Edwards and illustrated by Adam Horsepool. It's a picture book version of Moby Dick, to be sure, much condensed, thirty-two pages versus the complete 655, but it's a nice abridgment, with all the key happenings, and enlivened by the clever caricatures drawn by the illustrator. 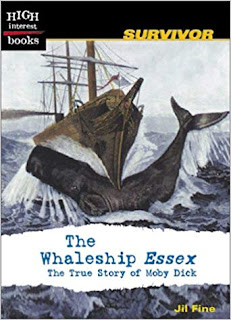 The Whaleship Essex: The True Story of Moby Dick by Jil Fine

Yes, it's a book for elementary age children, but The Whaleship Essex: The True Story of Moby Dick was an excellent introduction for me into the events that inspired Herman Melville to write his masterpiece. The Essex left Nantucket and traveled around Cape Horn and up around the Pacific Coast of South America when the ship attempted to harpoon a whale in late November. The angry whale retaliated by striking the 238 ton whaling ship twice, causing the ship to sink. The crew abandoned the ship, and took to the three whaling boats. Of the twenty crewmen, only eight were rescued, and the rescues did not take place until February, March, and for the last three, April. It's a devastating story, and, now that I've read a condensed version, I want to read more. I'm off to reserve Nathaniel Philbrook's In the Heart of the Sea: The Tragedy of the Whaleship Essex to read soon. 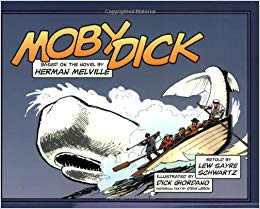 Moby Dick based on the novel by Herman Melville, retold by Lew Sayre Schwartz, illustrated by Dick Giordano

The City of New Bedford, long considered the Whaling Capital of the World, set out in 2001 to celebrate the 150th anniversary of the publishing of Moby Dick with an informative book for students. This is that book. It has three main parts: a biography of Herman Melville, a nonfiction section about whales and whaling, and a graphic novel of Moby Dick for children. It's an ideal introduction to Moby Dick for young people. And the occasional elderly librarian. 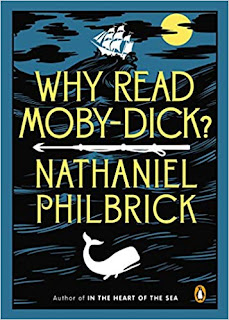 In this little book, written like a master's thesis from a besotted fan, Nathaniel Philbrick shares all his favorite lines and favorite themes and favorite issues from his beloved book, Moby Dick. Philbrick shows the contemporariness of Moby Dick through the issues Melville interweaves into his story as well as the timelessness of Moby Dick through the themes Melville touches upon. It's a love poem to Moby Dick, and I found myself reading the book while simultaneously marking passages in my Kindle version of Moby Dick to reflect upon later. 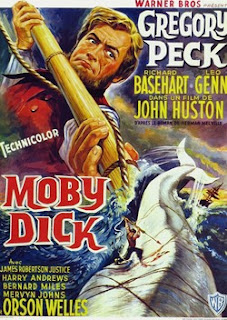 Serendipitously, I have just enough time to finish off the readathon with a movie of Moby Dick, choosing the John Huston-Gregory Peck-Orson Wells-Richard Basehart version. Perfect ending to a lovely readathon.

Posted by Deb Nance at Readerbuzz at 1:32 PM