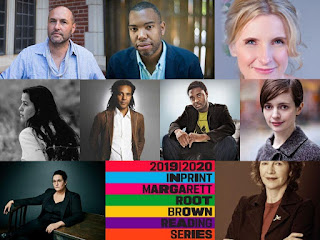 What signals the start of fall to me here in Houston? Well, it's certainly not the changing of the leaves or cool temperatures. No, it's the start of the Margaret Root Brown Inprint Reading Series. It's the---wait for it---39th season of the reading series, a series which has featured almost 400 authors from more than 35 countries on 6 continents, including the winners of 9 Nobel Prizes, 63 Pulitzer Prizes, 56 National Book Awards, 48 National Critics Circle Awards, and 15 Man Booker Prizes, as well as 15 U.S. Poet Laureates. 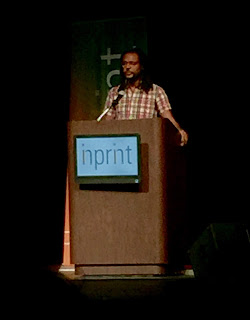 The start of the 2019-2020 series features Colson Whitehead, author of The Intuitionist, Sag Harbor, Pulitzer Prize Winner and National Book Award Winner The Underground Railroad, and his most recent book, The Nickel Boys. Whitehead has taught at many universities, including the University of Houston in its acclaimed Creative Writing Program.

Whitehead opens the program with a monologue worthy of best standup comedians. He tells the huge audience at Cullen Auditorium at UH that he grew up on cable tv, which his family "got as soon as we could, so we wouldn't have to talk to each other." One of the memorable shows he watched as a child was Night of the Living Dead, in which "a black man is chased by a group of white people, who want to tear him limb-from-limb, pretty much a metaphor for America."

The Nickel Boys, his latest book, was inspired by a newspaper article he read about a reform school for boys located in Florida. The school opened in 1900, and by 1903 it was known that abuses were taking place there, with children as young as six kept shackled, children punished in sweat boxes in the outdoor heat, and boys whipped with heavy straps.

Whitehead reads a short passage from The Nickel Boys and then is interviewed by Houston author Bryan Washington. 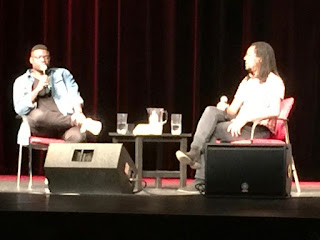 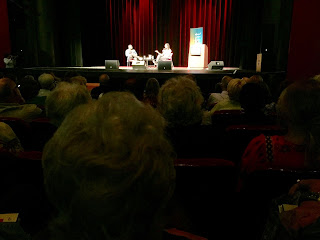 Washington asks a series of questions about themes in Whitehead's works, about the writing process, and even a little about Whitehead's love of cooking.

Washington reminds the audience that Whitehead lived in Houston and taught at UH some years ago.

"What do you miss about Houston?" Washington asks.

"The humidity," Whitehead replies, in his lovely deadpan manner. 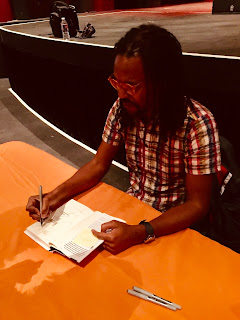 Whitehead closes out the evening autographing books. As a season subscriber, I was happy to bring home an autographed copy of The Nickel Boys as part of the subscription. I hope to read it soon.


Posted by Deb Nance at Readerbuzz at 8:25 AM