Some authors I have met were pre-social media. 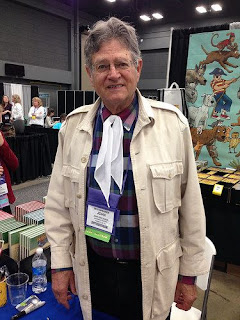 My son won a writing contest when he was in second grade and the whole family got to go see John R. Erickson, author of the Hank the Cowdog books. None of us will forget that day. No photos, unfortunately. 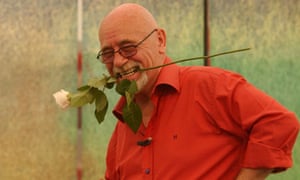 Brian Jacques, from his obituary in The Guardian in 2011

We had an independent children's bookstore in a neighboring town when my sons were boys. I remember taking my sons to see several authors there, including Brian Jacques, author of the Redwall series, when my oldest son was completely taken with those books. Jacques was an actor as well as an author, and I remember him being a captivating speaker. No photos, though. 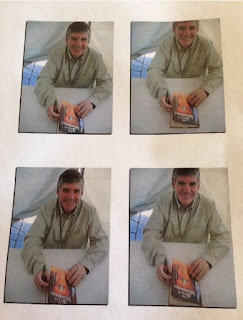 Rick Riordan at the Texas Book Festival, many years after I first met him in 2005

Way, way back, at one of the first Texas Library Association conferences I attended, I saw an author sitting in a booth with a huge stack of his books beside him. The author was eager to greet me and tell me about his book, his first children's book, giving me an advanced reader copy, urging me to read it. I took the copy to my hotel room that night along with another fifty or sixty other books. The copy looked a little sad, as I remember it, with a plain white cover and what looked like a hand-drawn lightning bolt on the front. I felt a little sorry for the author---he'd been so excited about his book though no one was lining up to take copies---and I decided to give his book a read that night. I couldn't put it down, and I read it to the very end. Fantastic, I thought. It was The Lightning Thief and the author was Rick Riordan.

Here's another happy Rick Riordan story. A group of parents from my school took their children to the Texas Book Festival around 2007 or 2008. One of the authors the children were eager to meet was Rick Riordan. Riordan did a fun session with the kids where he asked them questions from mythology, and the children who answered the questions correctly received a free Lightning Thief t-shirt. No one from our school won a t-shirt, but it was still great fun. Later we waited in line to have Riordan autograph our books. One of the children who came was the son of my library volunteer, Andrew. Andrew was a huge Rick Riordan fan and he'd read all his books. He tried to answer some of the mythology questions, but he didn't get called upon. He was a good sport, though, and he was thrilled to have Riordan autograph his book. As Riordan was autographing his book, he and Andrew were talking. Riordan asked what the group was going to do at the festival, and Andrew said they were going to go eat a big lunch together as it was his birthday. "It's your birthday?" Riordan asked. "Well," he said, pulling a t-shirt out of a bag, "I think you need one of these." It was one of those wonderful life moments. 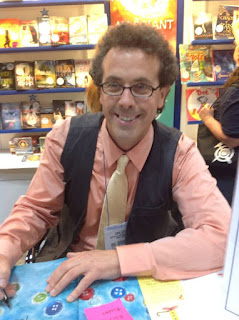 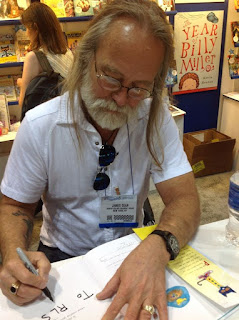 Eric Litwin and James Dean, sitting separately at ALA in Chicago in 2013

My first time at the American Library Association Conference in Chicago was in 2013. I couldn't wait to meet the author, Eric Litwin, and illustrator, James Dean, of the fabulous children's picture book, Pete the Cat. Imagine my surprise, then, when I saw the two of them, sitting completely apart from each other. They'd had a falling out. I still find it baffling that the author and illustrator of such a wonderfully uplifting book could have a fight and never work together again.


I often served as an author escort during the Texas Book Festival. "Have we got you an author to escort?!" I was told one year. "We have you a celebrity." "Who is it?" I asked. "It's Jewel," the person in charge of scheduling told me happily. I didn't reply, as I had no idea who Jewel was, but fortunately I was able to Google her before I met her. Jewel, I learned, was a pop singer who began to tour when she was very young. She had written a picture book for her young son, and she came to the book festival to promote it. The book was quite ordinary, I thought, but it was during the question-and-answer session with the author that I saw her real gifts. One of the audience asked Jewel to sing, and I caught that moment on video. It was breathtaking. 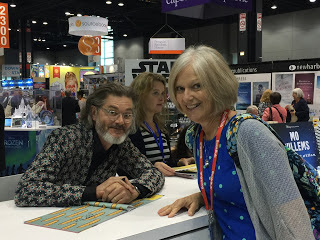 Mo and I, many years after we first met

Many years ago, when I was new to the library world, I went to the Texas Book Festival in Austin. I was most eager to meet the amazing Mo Willems, author of the brilliant Don't Let the Pigeon Drive the Bus. He was in the Read Aloud Tent where picture book authors read their books to children. He read Don't Let the Pigeon Drive the Bus to a group of about fifty young children and then taught them how to draw the pigeon by drawing it himself, step by step, on an oversized tablet. I'll never forget bravely going up to Mo after the session and asking him if I could have his drawing of the pigeon for my school library. He paused, staring right at me, and said, very dramatically, "It will be DESTROYED!" I didn't quite know what to say to that, and I was left with the impression of an author who was a little too full of himself. It took me many years to approach him again. At Book Expo in New York City, I was given an opportunity to meet him and speak to him for a few minutes. By this time, I realized he was simply a free spirit, an author who didn't necessarily enjoy doing all the usual things expected of a children's author, and I didn't hold him accountable for his odd speech and actions. 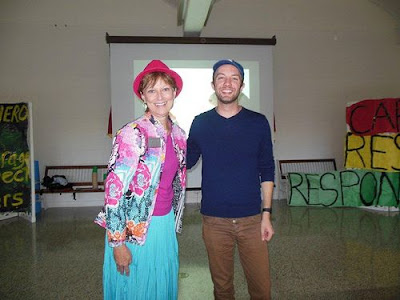 Jon and I at my school

One of the happiest days of my working life was when I met the owner of Houston's marvelous independent bookstore, Blue Willow Bookshop. A group of us librarians from our school district met with the owner and some of the staff from the bookstore, and Cathy from Blue Willow shared their author schedule for the year. "Oh," I sighed, "if I could have any author come to visit my school it would be Jon Klassen." I'd just read I Want My Hat Back, Jon Klassen's first book, and I was an instant fan of the book and the author. "I'm sorry," Cathy told me, "but we've already filled the calendar of schools for the fall." We spent time shopping in the store, but when we got ready to leave Cathy came over to me and said, "What if I could arrange to have Jon Klassen come to your school? We've just had a cancellation." And so Jon Klassen did a school visit at my school all the way over in Alvin that October, many miles from Blue Willow Books. And in January Jon Klassen won the Caldecott.

Email ThisBlogThis!Share to TwitterShare to FacebookShare to Pinterest
Labels: authors