Books that Make Me Hungry: The Best Memoirs About Learning to Cook and Bake

Have you always wanted to go to cooking school? Perhaps we can't do that right now, but there is no reason we can't read about what it was like for others. Here are eleven of my favorites. 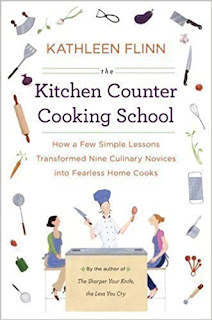 "After graduating from Le Cordon Bleu in Paris, writer Kathleen Flinn returned with no idea what to do next, until one day at a supermarket she watched a woman loading her cart with ultraprocessed foods. Flinn's "chefternal" instinct kicked in: she persuaded the stranger to reload with fresh foods, offering her simple recipes for healthy, easy meals." 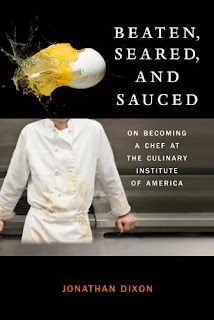 Beaten, Seared, and Sauced: On Becoming a Chef at the Culinary Institute of America by Jonathan Dixon
Ave. Goodreads Rating: 3.62
"Millions of people fantasize about leaving their old lives behind, enrolling in cooking school, and training to become a chef. But for those who make the decision, the difference between the dream and reality can be gigantic—especially at the top cooking school in the country. For the first time in the Culinary Institute of America’s history, a book will give readers the firsthand experience of being a full-time student facing all of the challenges of the legendary course in its entirety." 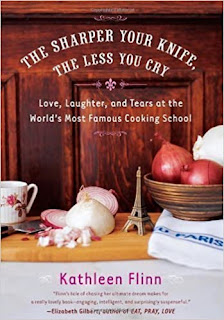 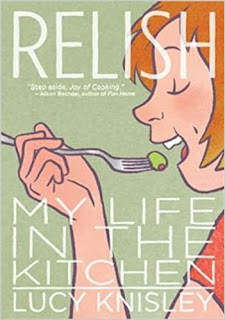 Relish: My Life in the Kitchen by Lucy Knisley
Ave. Goodreads Rating: 3.94
"Lucy Knisley loves food. The daughter of a chef and a gourmet, this talented young cartoonist comes by her obsession honestly. In her forthright, thoughtful, and funny memoir, Lucy traces key episodes in her life thus far, framed by what she was eating at the time and lessons learned about food, cooking, and life." 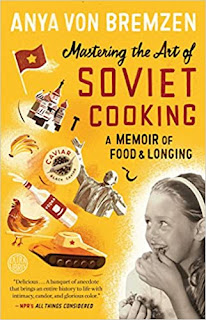 Mastering the Art of Soviet Cooking: A Memoir of Food and Longing by Anya von Bremzen
Ave. Goodreads Rating: 3.98
"Born in 1963, in an era of bread shortages, Anya grew up in a communal Moscow apartment where eighteen families shared one kitchen. When Anya was ten, she and her mother fled the political repression of Brezhnev-era Russia, arriving in Philadelphia with no winter coats and no right of return. Now Anya occupies two parallel food universes: one where she writes about four-star restaurants, the other where a taste of humble kolbasa transports her back to her scarlet-blazed socialist past. To bring that past to life, Anya and her mother decide to eat and cook their way through every decade of the Soviet experience." 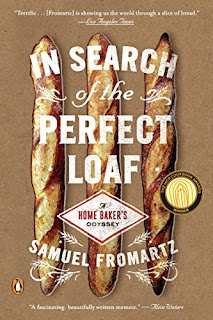 In Search of the Perfect Loaf: A Home Baker's Odyssey by Samuel Fromartz
Ave. Goodreads Rating: 3.84
"In 2009, journalist Samuel Fromartz was offered the assignment of a lifetime: to travel to France to work in a boulangerie. So began his quest to hone not just his homemade baguette—which later beat out professional bakeries to win the “Best Baguette of D.C.”—but his knowledge of bread, from seed to table. For the next four years, Fromartz traveled across the United States and Europe, perfecting his sourdough in California, his whole grain rye in Berlin, and his country wheat in the South of France. Along the way, he met historians, millers, farmers, wheat geneticists, sourdough biochemists, and everyone in between, learning about the history of breadmaking, the science of fermentation, and more." 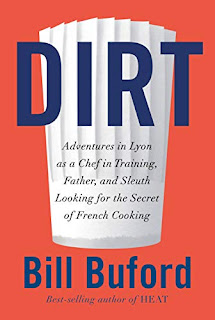 Dirt: Adventures in Lyon as a Chef in Training, Father, and Sleuth Looking for the Secret of French Cooking by Bill Buford
Ave. Goodreads Rating: 3.56
"Bill Buford turns his inimitable attention...to the food of France. Baffled by the language, but convinced that he can master the art of French cooking--or at least get to the bottom of why it is so revered-- he begins what becomes a five-year odyssey by shadowing the esteemed French chef Michel Richard, in Washington, D.C. But when Buford (quickly) realizes that a stage in France is necessary, he goes--this time with his wife and three-year-old twin sons in tow--to Lyon, the gastronomic capital of France. Studying at L'Institut Bocuse, cooking at the storied, Michelin-starred La Mère Brazier, enduring the endless hours and exacting rigeur of the kitchen, Buford becomes a man obsessed--with proving himself on the line, proving that he is worthy of the gastronomic secrets he's learning, proving that French cooking actually derives from (mon dieu!) the Italian." 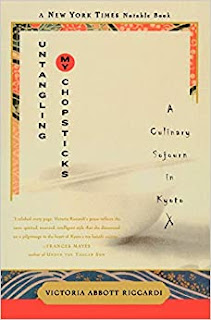 Untangling My Chopsticks: A Culinary Sojourn in Kyoto by Victoria Abbott Riccardi
Ave. Goodreads Rating: 3.59
"Two years out of college and with a degree from Le Cordon Bleu in Paris, Victoria Riccardi left a boyfriend, a rent-controlled New York City apartment, and a plum job in advertising to move to Kyoto to study kaiseki, the exquisitely refined form of cooking that accompanies the formal Japanese tea ceremony. She arrived in Kyoto, a city she had dreamed about but never seen, with two bags, an open-ended plane ticket, and the ability to speak only sushi-bar Japanese. She left a year later, having learned the language, the art of kaiseki, and what was truly important to her." 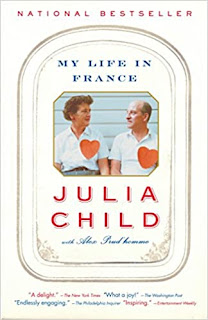 My Life in France by Julia Child
Ave. Goodreads Rating: 4.18
"Although she would later singlehandedly create a new approach to American cuisine with her cookbook Mastering the Art of French Cooking and her television show The French Chef, Julia Child was not always a master chef. Indeed, when she first arrived in France in 1948 with her husband, Paul, who was to work for the USIS, she spoke no French and knew nothing about the country itself. But as she dove into French culture, buying food at local markets and taking classes at the Cordon Bleu, her life changed forever with her newfound passion for cooking and teaching. Julia’s unforgettable story—struggles with the head of the Cordon Bleu, rejections from publishers to whom she sent her now-famous cookbook, a wonderful, nearly fifty-year long marriage that took the Childs across the globe—unfolds with the spirit so key to Julia’s success as a chef and a writer, brilliantly capturing one of America’s most endearing personalities." 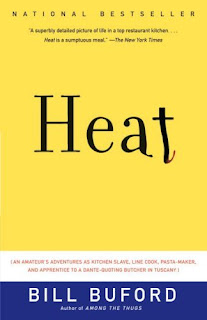 Heat: An Amateur Cook in a Professional Kitchen by Bill Buford
Ave. Goodreads Rating: 3.90
"Bill Buford was a highly acclaimed writer and editor at the New Yorker when he decided to leave for a most unlikely destination: the kitchen at Babbo, the revolutionary Italian restaurant in New York. Finally realizing a long-held desire to learn first-hand the experience of restaurant cooking, Buford soon finds himself drowning in improperly cubed carrots and scalding pasta water on his quest to learn the tricks of the trade. His love of Italian food then propels him further afield: to Italy, to discover the secrets of pasta-making and, finally, how to properly slaughter a pig. Throughout, Buford stunningly details the complex aspects of Italian cooking and its long history, creating an engrossing and visceral narrative stuffed with insight and humor. The result is a hilarious, self-deprecating, and fantasically entertaining journey into the heart of the Italian kitchen." 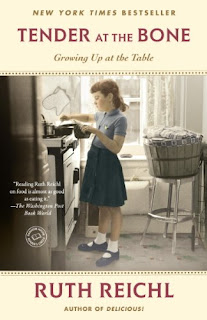 Tender at the Bone: Growing Up at the Table by Ruth Reichl
Ave. Goodreads Rating: 4.07
"At an early age, Ruth Reichl discovered that “food could be a way of making sense of the world. If you watched people as they ate, you could find out who they were.” Her deliciously crafted memoir Tender at the Bone is the story of a life defined, determined, and enhanced in equal measure by a passion for food, by unforgettable people, and by the love of tales well told. Beginning with her mother, the notorious food-poisoner known as the Queen of Mold, Reichl introduces us to the fascinating characters who shaped her world and tastes, from the gourmand Monsieur du Croix, who served Reichl her first foie gras, to those at her politically correct table in Berkeley who championed the organic food revolution in the 1970s. Spiced with Reichl’s infectious humor and sprinkled with her favorite recipes, Tender at the Bone is a witty and compelling chronicle of a culinary sensualist’s coming-of-age."
Have you read any of these?
Do you have other suggestions for good memoirs about learning how to bake and cook?
Other lists with a food-theme:
All-Time Favorite Foodie Narratives
Ten Books to Read if You are in the Mood for Armchair Foodie Travel Books
Top Ten Tuesday was created by The Broke and the Bookish in June of 2010 and was moved to That Artsy Reader Girl in January of 2018. It was born of a love of lists, a love of books, and a desire to bring bookish friends together. Each Tuesday That Artsy Reader Girl assigns a topic and then post her top ten list that fits that topic. You’re more than welcome to join her and create your own top ten (or 2, 5, 20, etc.) list as well. Feel free to put a unique spin on the topic to make it work for you! Please link back to That Artsy Reader Girl in your own post so that others know where to find more information.
Posted by Deb Nance at Readerbuzz at 12:00 AM