Why I Love French-ish Books (and Why You Should Love Them, Too)

I think of French-ish books as books that (1) were originally written in French and/or (2) are set in France and/or (3) were written by French authors and/or (4) deal with French themes... 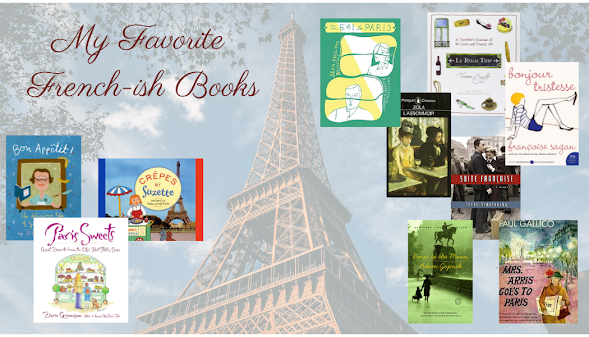 "Suite F is a singularly piercing evocation---at once, subtle and severe, deeply compassionate, and fiercely ironic---of life and death in occupied France, and a brilliant, profoundly moving work of art."
Paris to the Moon by Adam Gopnik. Memoir; moving-and-starting-over.
"In 1995, Adam Gopnik, his wife, and their infant son left the familiar comforts and hassles of New York City for the urbane glamour of the City of Light. Gopnik is a longtime New Yorker writer, and the magazine has sent its writers to Paris for decades--but his was above all a personal pilgrimage to the place that had for so long been the undisputed capital of everything cultural and beautiful."

"Part story, part grand tour, Monica Wellington's tale of a Parisian street-cart vendor will charm and inform. Suzette, the crepe maker, sells her delicacies in one of the most beautiful cities in the world. As she goes from place to place, readers are treated to a variety of Parisian scenes and a series of customers inspired by figures in famous French paintings."
Le Road Trip: A Traveler's Journal of Love and France by Vivian Swift. Travel; graphic novel.
"Le Road Trip tells the story of one idyllic French honeymoon trip, but it is also a witty handbook of tips and advice on how to thrive as a traveler, a captivating visual record with hundreds of watercolor illustrations, and a chronicle depicting the incomparable charms of being footloose in France."
L'Assommoir by Émile Zola. Novel.
"L'Assommoir (1877) is the story of a woman's struggle for happiness in working-class Paris. At the center of the story stands Gervaise, who starts her own laundry and for a time makes a success of it. But her husband soon squanders her earnings in the Assommoir, a local drinking spot, and gradually the pair sink into poverty and squalor."
Paris Sweets: Great Desserts from the City's Best Pastry Shops by Dorie Greenspan. Cookbook.
"From classic recipes, some centuries old, to updated innovations, Paris Sweets provides a sumptuous guide to creating cookies, from the fabled madeleine to simple, ultra-buttery sables; tarts, from the famous Tatin, which began its life as an upside-down error, to a delightful strawberry tart embellished with homemade strawberry marshmallows; and a glorious range of cakes–lemon-drenched "weekend cake," fudge cake, and the show-stopping Opera."
Bonjour Tristesse by Françoise Sagan. Novel.
"Françoise Sagan's astonishing first novel Bonjour Tristesse...tells the story of Cécile, who leads a carefree life with her widowed father and his young mistresses until, one hot summer on the Riviera, he decides to remarry - with devastating consequences."
Mrs. 'Arris Goes to Paris by Paul Gallico. Novel.
"Mrs. Harris is a salt-of-the-earth London charlady who cheerfully cleans the houses of the rich. One day, when tidying Lady Dant's wardrobe, she comes across the most beautiful thing she has ever seen in her life - a Dior dress. In all the years of her drab and humble existence, she's never seen anything as magical as the dress before her and she's never wanted anything as much before. Determined to make her dream come true, Mrs Harris scrimps, saves and slaves away until one day, after three long, uncomplaining years, she finally has enough money to go to Paris."
Bon Appetit! The Delicious Life of Julia Child by Jessie Hartland. Nonfiction picture book.
"Follow Julia Child—chef, author, and television personality—from her childhood in Pasadena, California, to her life as a spy in WWII, to the cooking classes she took in Paris, to the publication of Mastering the Art of French Cooking, to the funny moments of being a chef on TV. This is a comprehensive and enchanting picture book biography, told in many panels and jam-packed with lively, humorous, and child-friendly details."
The 6:41 to Paris by Jean-Philippe Blondel. Novel.
"Cécile, a stylish forty-seven-year-old, has spent the weekend visiting her parents in a provincial town southeast of Paris. By early Monday morning, she's exhausted. These trips back home are always stressful and she settles into a train compartment with an empty seat beside her. But it's soon occupied by a man she instantly recognizes: Philippe Leduc, with whom she had a passionate affair that ended in her brutal humiliation thirty years ago. In the fraught hour and a half that ensues, their express train hurtles towards the French capital."
And, now, the big question: Why do I love French-ish books so much? The mystery of the French? The intrigue? Beauty? Cleverness? Depth? The simplicity along with the complexity? A bit of (deserved) arrogance?
Who knows?
It reminds me of a conversation between Jerry Seinfeld and Dave Chappelle on Comedians in Cars Getting Coffee:
Dave: Paris...I don't know if I can live there.
Jerry: Why?
Dave: Something about the culture of the city makes me feel foreign.
Jerry: Yeah, well, you are.
Dave: Well, no---
Jerry: Yeah, they're not welcoming you.
Dave: Yeah, they're not, like---There's no welcome mat.
Jerry: No. But that doesn't bother me. I feel like if I had what they had, I'd be the same way. If I could make bread like that, if I had women like that, I would look down on everybody. If I could dress like that...their condescension to me is earned.
Do you love books set in France, about France, by French authors, with French themes?
Do you have any favorites?
Any thoughts about the books on my list?