The Wackiest Titles of Books


Who knew there is actually a prize for the book with the oddest title each year? In 1994, the prize went to Highlights in the History of Concrete. The next year, the prize was given to Reusing Old Graves. Harry Abrams Publishing, no less, apparently put The Stray Shopping Carts of Eastern North America: A Guide to Field Identification out in 2006.

Sadly, I haven't read any of these.

I have, however, read these jewels: 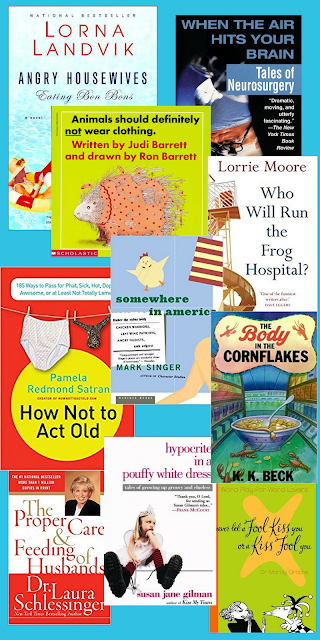 Hypocrite in a Pouffy White Dress: Tales of Growing up Groovy and Clueless

Who Will Run the Frog Hospital?

Body in the Cornflakes

Never Let a Fool Kiss You or a Kiss Fool You

Animals Should Definitely Not Wear Clothing

When the Air Hits Your Brain: Tales of Neurosurgery

How Not to Act Old: 185 Ways to Pass for Phat, Sick, Hot, Dope, Awesome, or at Least Not Totally Lame

The Proper Care and Feeding of Husbands

Have you read any of these? What are some of the oddest titled books you have read?

Top Ten Tuesday is an original feature/weekly meme created at The Broke and the Bookish. This feature was created because we are particularly fond of lists here at The Broke and the Bookish. We'd love to share our lists with other bookish folks and would LOVE to see your top ten lists.
SaveSaveSaveSave
Posted by Deb Nance at Readerbuzz at 12:01 AM