Books Set in the Afterlife

Do you know the myth of Persephone? She was living happily on Earth with her mother, Demeter, the goddess of the harvest, when Hades, king of the underworld, kidnapped her and took her to live in his kingdom. Demeter wanted Persephone to return to her, but Hades tricked Persephone by feeding her pomegranate seeds, and the seeds made Persephone long to stay in the Underworld.

The end result is that Persephone lives half the year on Earth with her mother during spring and summer, and she spends half the year, during fall and winter, with her husband, Hades.

And that is how I took the idea of books with fall vibes and somehow ended up with a list of books set in the underworld.

Here are a few you might like. Not all are set in the underworld, but all have themes of the afterlife and death. I have not yet read those with asterisks. 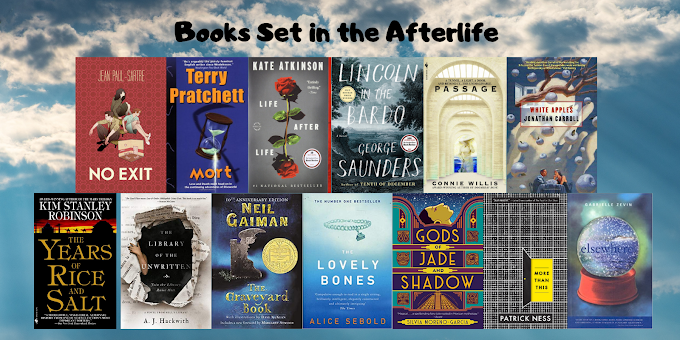 The Graveyard Book by Neil Gaiman

Lincoln in the Bardo by George Saunders

Gods of Jade and Shadow by Silvia Moreno-Garcia

The Library of the Unwritten by A. J. Hackwith

No Exit by Jean-Paul Sartre

The Lovely Bones by Alice Sebold

What Dreams May Come by Richard Matheson*

Being Dead: A Novel by Jim Crace*

The Years of Rice and Salt by Kim Stanley Robinson*

Life After Life by Kate Atkinson*

Lord of Life by Zelazny*

The Afterlife of Holly Chase by Cynthia Hand*

It's a Wonderful Death* by Sarah J. Schmidt*

The Brief History of the Dead by Kevin Brockmeier*

More Than This by Patrick Ness*