Austen in August: Which Jane Austen Novel is the Classic-est?

I'm one of the moderators at The Classics Club. We are a group of readers who each set a goal of trying to read fifty classics (our own choice) in five years. One of the classic authors I've sadly neglected is Jane Austen. She has only written six books: 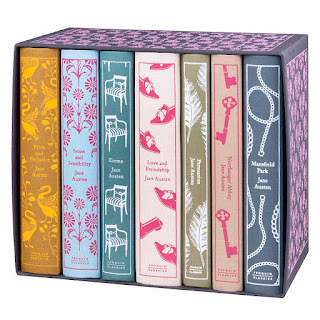 Pride and Prejudice
Sense and Sensibility

At The Classics Club blog, we have a master list of classics posted to help new potential members choose fifty books to read. It's called the Big Book List. Here's the amazing thing: not only are every one of Jane's six published novels on this list, but every single thing Jane ever wrote is on this list, including her very early writings, her incomplete books, and her letters.

My conclusion: No one doubts that Jane Austen's books are classics.

And that is rare in the classical book world.

A question then arises: Which Jane Austen novel is (let's just create our own useful word here) the classic-est?

Off to pose this question to the experts....

Robert McCrum in The Guardian chooses Emma. Porque? "Austen's last novel has the sparkle of early books such as Pride and Prejudice, mixed with a sharper and deeper sensibility." For The Guardian, 'In the end, it answers Jane Austen's own high-spirited prescription for the novel, expressed in Northanger Abbey: "in short, only some work in which the most thorough knowledge of human nature, the happiest delineation of its varieties, the liveliest effusions of wit and humour are conveyed to the world in the best chosen language."' High praise indeed.

Literature teacher Amy Elizabeth Smith headed to South and Central America in All Roads Lead to Austen to see if readers in those countries could connect to Austen. Smith has taught Austen novels for years and is a member of the Jane Austen Society of North America. Her favorite Austen? Austen's Gothic parody, Northanger Abbey. Why? "Catherine Morland is sweet and sincere, if a bit daft at times, and Henry Tilney is Austen’s most playful and witty male lead."

Robert Morrison, Professor of English Literature, Queens University, Ontario, writes, "Jane Austen’s greatest novel is Persuasion. It is – among many other things – the most moving love story she ever told."

Mansfield Park has always been, for Paula Byrne, author of The Real Jane Austen, a deal-breaker; she refuses to love anyone who doesn't love Mansfield Park. As she writes in The Telegraph, "The novel is a profound exploration of the duty of parents to shape their children’s moral and spiritual development. It includes a father who is emotionally distant, his children chilled into respect. It reflects on the importance of home, the nature of a good education, the alienation of sons from their fathers. At the centre of the book is a displaced child with an unshakeable conscience. A true heroine."

In an article in Psychology Today, Dr. Scott M. Stanley analyses what readers can learn about themselves from reading Jane Austen. "I like Sense and Sensibility best because in it, Austen reveals most clearly the confusion of intention that captivates me as a reader—and a researcher. She understood the dangers of ambiguity in love long before it became what we now see as a dominant aspect of romantic and sexual relationships in life before marriage."

Bustle book editor Cristina Arreola speaks up for her favorite: "...Pride and Prejudice changed my life. I consumed it like I was starving for words. When I finished, I went to the library and checked out all of Jane Austen's other novels. This woman had lived nearly two hundred years before me, but I felt like she had written these words expressly so that I could read them. I was 12-years-old."

Some concede that they just can't choose; they like them all. Vox, for example, writes:

"Jane Austen's 6 novels defy rankings. Here's what each one does best.

Let's just hope you don't side with Mark Twain who described the ideal library as one with no Jane Austen books. He made fun of Austen's writings, the reading of which made him "feel like a barkeeper entering the Kingdom of Heaven".

What are your thoughts? Vote in the poll below. I'd love to hear your views. Share any other thoughts you have in the comments.

Austen in August is a celebration of all things Jane Austen, featuring reviews, discussions, vlogs, giveaways, interviews and more. This event runs all of the month of August. Faith Hope and Cherrytea has also created an Austen in August Instagram challenge for the month of August.  To find out more about the Austen in August Instagram challenge, visit Faith Hope and Cherrytea. To find out more about Austen in August, visit The Book Rat.
What is the Sunday Salon? Imagine some university library's vast reading room. It's filled with people--students and faculty and strangers who've
wandered in. They're seated at great oaken desks, books piled all around them,and they're all feverishly reading and jotting notes in their leather-bound
journals as they go. Later they'll mill around the open dictionaries and compare their thoughts on the afternoon's literary intake....That's what happens
at the Sunday Salon, except it's all virtual. Every Sunday the bloggers participating in that week's Salon get together--at their separate desks, in their
own particular time zones--and read. And blog about their reading. And comment on one another's blogs. Think of it as an informal, weekly,
mini read-a-thon, an excuse to put aside one's earthly responsibilities and fall into a good book. Click here to join the Salon.


It’s Monday! What Are You Reading? is where we share what we read this past week, what we hope to read this week…. and anything in between!
This is a great way to plan out your reading week and see what others are currently reading as well… you never know where that next “must read”
book will come from! I love being a part of this and I hope you do too! It's Monday! What Are You Reading? is now being hosted at The Book Date.