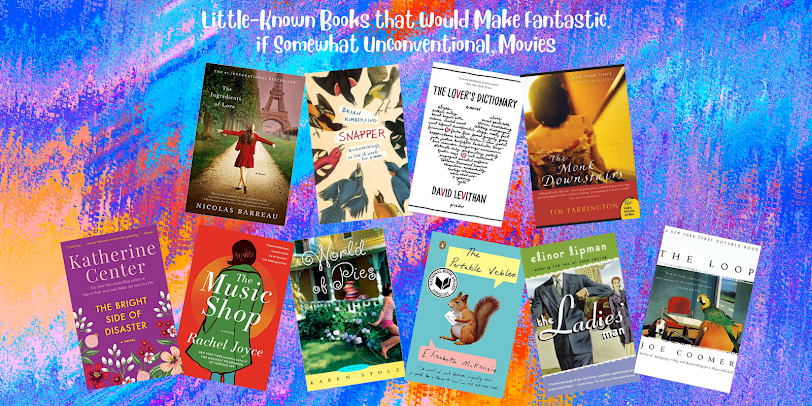 The Monk Downstairs by Tim Farrington

"Rebecca Martin is a single mother with an apartment to rent and a sense that she has used up her illusions. I had the romantic thing with my first husband, thank you very much, she tells a hapless suitor. I'm thirty-eight years old, and I've got a daughter learning to read and a job I don't quite like. I don't need the violin music. But when the new tenant in her in-law apartment turns out to be Michael Christopher, on the lam after twenty years in a monastery and smack dab in the middle of a dark night of the soul, Rebecca begins to suspect that she is not as thoroughly disillusioned as she had thought."

The Bright Side of Disaster by Katherine Center

"Very pregnant and not quite married, Jenny Harris doesn't mind that she and her live-in fiancé, Dean, accidentally started their family a little earlier than planned. But Dean is acting distant, and the night he runs out for cigarettes and doesn't come back, he demotes himself from future husband to sperm donor. And the very next day, Jenny goes into labor. In the months that follow, Jenny plunges into a life she never anticipated: single motherhood. At least with the sleep deprivation, sore boobs, and fits of crying (both hers and the baby's), there's not much time to dwell on her broken heart. And things are looking up: Jenny learns how to do everything one-handed, makes friends in a mommy group, and even gets to know a handsome, helpful neighbor. But Dean is never far from Jenny's thoughts or, it turns out, her doorstep, and in the end she must choose between the old life she thought she wanted and the new life she's been lucky to find."

The Loop by Joe Coomer

"Lyman, a thirty-year-old orphan, is sipping coffee on the front steps of the trailer he calls home one morning, when a ninety-year-old parrot arrives with a beakful of cryptic sayings -- such as "That which hath wings shall tell the matter" -- and a mysterious past. Convinced that heeding the bird's wisdom will lead him to answers about himself he so desperately seeks, Lyman combines his night job as a courtesy patrolman, circling the highway that loops around Fort Worth, with days in the library. Together with Fiona, the loquacious librarian, he traces his adopted pet's origins, and while what Lyman ultimately discovers may not help him piece together his own past, it paves the way for a future he never imagined."

The Ladies' Man by Elinor Lipman

"Thirty unmarried years have passed since the barely suitable Harvey Nash failed to show up at a grand Boston hotel for his own engagement party. Today, the near-bride, Adele Dobbin, and her two sisters, Lois and Kathleen, blame Harvey for what unkind relatives call their spinsterhood, and what potential beaus might characterize as a leery, united front. The doorbell rings one cold April night. Harvey Nash, older, filled with regrets (sort of), more charming and arousable than ever, just in from the Coast, where he's reinvented himself as Nash Harvey, jingle composer and chronic bachelor, has returned to the scene of his first romantic crime. Despite the sisters' scars and grudges, despite his platinum tongue and roving eye, this old flame becomes an improbable catalyst for the untried and the long overdue."

The Music Shop by Rachel Joyce

"It is 1988. On a dead-end street in a run-down suburb there is a music shop that stands small and brightly lit, jam-packed with records of every kind. Like a beacon, the shop attracts the lonely, the sleepless, and the adrift; Frank, the shop’s owner, has a way of connecting his customers with just the piece of music they need. Then, one day, into his shop comes a beautiful young woman, Ilse Brauchmann, who asks Frank to teach her about music. Terrified of real closeness, Frank feels compelled to turn and run, yet he is drawn to this strangely still, mysterious woman with eyes as black as vinyl. But Ilse is not what she seems, and Frank has old wounds that threaten to reopen, as well as a past it seems he will never leave behind. Can a man who is so in tune with other people’s needs be so incapable of connecting with the one person who might save him? The journey that these two quirky, wonderful characters make in order to overcome their emotional baggage speaks to the healing power of music—and love—in this poignant, ultimately joyful work of fiction."

The Portable Veblen by Elizabeth Mckenzie

"A young couple on the brink of marriage—the charming Veblen and her fiancé Paul, a brilliant neurologist—find their engagement in danger of collapse. Along the way they weather everything from each other’s dysfunctional families, to the attentions of a seductive pharmaceutical heiress, to an intimate tête-à-tête with a very charismatic squirrel."

World of Pies by Karen Stolz

"In this remarkable debut work from author Karen Stolz, readers follow the arc of a girl's life as she grows to womanhood. From crushes to surprise baby sisters to nail polish to a devastating death, Roxanne is our guide through a life that has moments of tenderness, poignancy, sorrow, and great humor, as well as some wonderful baking memories. A sumptuous novel--though like the best pie, tart in all the right places."

The Ingredients of Love by Nicholas Barreau

"While in the midst of a breakup-induced depression, Aurélie Bredin, a beautiful Parisian restaurateur, discovers an astonishing novel in a quaint bookshop on the Ile Saint-Louis. Inexplicably, her restaurant and Aurélie herself are featured in its pages. After reading the whole book in one night, she realizes it has saved her life―and she wishes more than anything to meet its author. Aurélie's attempts to contact the attractive but shy English author through his French publishers are blocked by the company's gruff chief editor, André, who only with great reluctance forwards Aurélie's enthusiastic letter. But Aurélie refuses to give up. One day, a response from the reclusive author actually lands in her mailbox, but the encounter that eventually takes place is completely different from what she had ever imagined. . . . "

The Lover's Dictionary by David Leviathan

"Taking a unique approach to this age-old problem, the nameless narrator of David Levithan's The Lover's Dictionary constructs the story of a relationship as a dictionary. Through these sharp entries, he provides an intimate window into the great events and quotidian trifles of coupledom, giving us an indelible and deeply moving portrait of love in our time."

"Set in a brilliantly observed rural Indiana, Snapper is a book about birdwatching, a woman who won't stay true, and a pick-up truck that won't start. Here turtles eat alligators for breakfast, Klansmen skulk in the undergrowth, and truckers drop into the diner of a town named Santa Claus to ensure that no child's Christmas letter goes unanswered, while Nathan grapples with the eternal question: should I stay, or should I go?"

Have you read any of these? Do you have any suggestions for books that would make fantastic, if somewhat unconventional, movies?

And, btw, don't wait for the movie...these make fantastic, if somewhat unconventional reads as well...