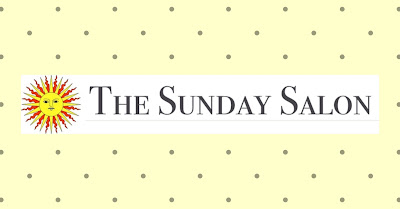 I started my blog for a class that met the requirements for summer inservice hours. I've been a computer person from the get-go. I joined the math club in high school (ugh, math) primarily so that I could play on the room-sized computer that only those in the math club could use. The first real purchase we made as a family was a home computer. (Funny story: I was used to the Apple computers we had at school, but this newly purchased computer was a DOS computer. I had it for a week before I finally, in desperation, called my cousin and told him that I thought our computer was broken; once it booted up, all it would do was sit there and blink C:// over and over again.) I'd joined an online book club as early as 1999.

Becoming a blogger wasn't very interesting at first; I wrote posts, but no one read them or commented on them. Learning about the social aspects of blogging was world-changing for me. That first year of blogging I learned the most important thing: Blogging isn't a monologue; it's a conversation. That first month I blogged other bloggers told me about Dewey's 24-Hour Readathon, the Cybils (Children's and Young Adult Bloggers' Literary Awards), and the Sunday Salon.

It was through these social venues that I began to love blogging. And one of my favorites has always been the Sunday Salon.

The Sunday Salon was started sometime before 2008 by Debra Hamel. She blogged at Typepad and used some sort of complex system called Yahoo Pipes to allow bloggers to share links with each other. It didn't take long for the Sunday Salon to explode. By 2010, the Sunday Salon had 500 participants and could no longer accept new members. Debra moved the Salon to Facebook in 2011 but the intimacy of the original Salon was hard to maintain in this new venue, and by 2019, only a few bloggers were posting links each week.

At the end of 2018, I began to compile information for a post on book blogging memes (see Book Blog Memes: An Exhaustive List for my results). I checked to see which memes were still active, and one of the memes I checked on was the Sunday Salon. Debra assured me she was still the administrator of the Facebook group, but she showed some interest in passing the baton. Would I like to press on with the Salon?

Yes, I would. I am retired now, for goodness' sake, and how better to spend my time than to take this lovely tool and see if I can revive it a bit?

But how to proceed?

I need some input. Could you share your thoughts with me? I am imbedding a short Google Form here and I'm also adding it on Facebook. Could you answer the questions? It's anonymous, though you can certainly reveal who you are in the comments section of the form, if you wish. Please let me know what you think.