What Happened to My America? And How Can We Fix Things? Thoughts about Our Towns, Alienated America, and Love Your Enemies

Let me start with a story.

Back in 2001, I worked for the U.S. Census Bureau. Many people don't know that the Census Bureau does much more than simply count the number of people in the US every ten years. There are ongoing surveys that Americans are asked to participate in. During my years with the Census Bureau, I went to people's homes and asked a list of questions for various government surveys about employment, housing starts, income, health, and many other important topics. The specific data about each person is confidential and I took an oath to always keep the data confidential, and, of course, I will always do that.

But the responses to one question on one health survey have always stuck with me. The question was:  "Outside my immediate family, I have few close friends. True or false?" I administered this survey to exactly one hundred people and ninety-five said that statement was true.

Let me restate this to clarify: Ninety-five percent of the people I interviewed said they have few close friends.

This was astounding to me. I grew up in a small town, and, after I married, I raised my children in the same small town where my parents and in-laws and siblings and all of their extended families lived. I still live in this town. Over the years, I have met many, many people outside my town as well, through my volunteer activities and work and church and my love of books, and I talk often to these people and I try to get together whenever I can. In short, I feel like I have many, many close friends.

But most people do not feel this way. Most people in America feel alienated, friendless, lonely, alone. 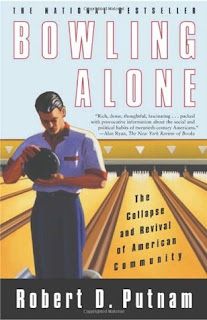 This continued to stick in my mind. In 2002, I read a book called Bowling Alone by Robert D. Putnam. Putnam gathered data from all across America and came to the same conclusions I'd come to after my stint with the Census Bureau:

In more recent years I've become deeply disturbed by the climate here in America. During and after the last national election for president, I've been dismayed at the behavior of our leaders, especially our elected president. I was shocked when Donald Trump was elected as our president, and I've been horrified by the words he has spoken to others during his time as president. I don't watch television, but the bits of public life that have filtered down to me fill me with sadness and trepidation. 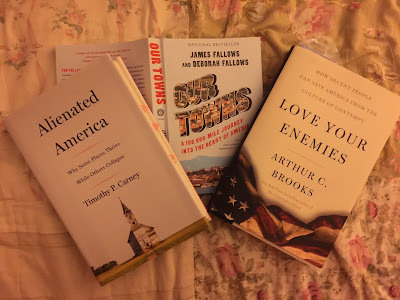 What is going on in my America?

I picked up three books at the recent library conference in Austin that I've been reading in tandem over the past weeks. These books have helped me understand the malaise of the American people. They have helped me think through ways that we can work to change the mood and behavior of the people of our country.

The three books I read are:


Alienated America: Why Some Places Thrive While Others Collapse by Timothy P. Carney
Our Towns: A 100,000 Journey Into the Heart of America by James M. and Deborah Fallows
Love Your Enemies: How Decent People Can Save America from the Culture of Contempt by Arthur C. Brooks

What have I learned from reading these books?

Timothy P. Carney looks at the hard, cold facts about America today, especially those who brought Trump into power. The places where Trump scored big are key to understanding why he was elected, Carney tells us. What are those places like?

"Death rates, especially death by suicide and overdose, correlated with Trump's best counties....Educational attainment is lower in Trump Country. More people are on unemployment. More people are on disability. These economic indicators are devastating, and crucial. But more telling are the social indicators. More men have dropped out of the workforce. Marriage rates are lower. Illegitimacy is higher. Divorce is higher....(Members of this group) said religion was very important to them, but...they were the least likely to go to church."

I found this absolutely fascinating stuff. Trump scores well in places where people are unhappy and communities are weak.

To add to the problems, the right, Carney tells us, has steadily worked for big businesses over small businesses, deeply weakening community bonds.

On the other side, according to Carney, the left has been promoting ideas for years that also build community alienation, stressing overcentralized government programs that provide for the poor at the expense of individuals and local efforts to help the poor, and emphasizing individual freedoms at the expense of the stabilizing effects of marriage and family and church and community on each person.

Arthur C. Brooks, in Love Your Enemies, shares the destructive power of contempt by citing the work of social psychologist and relationship expert John Gottman. Gottman, Brooks tells us, has studied thousands of married couples. After watching a couple interact for just one hour, Gottman can predict with 94 percent accuracy whether a couple will divorce within three years. What is this based on? It isn't the amount of anger a couple expresses, but, instead, it is the amount of contempt one member shows for another. And it is this contempt for one another in political matters that is currently making it impossible for opposing political parties to work together.

So where are we now? Yelling and screaming at each other from positions far to the left or right of our common ground. Cutting off friendships and family connections based on these extreme political positions.

In short, a mess.

Here is where Arthur C. Brooks takes up the struggle. In his book, Love Your Enemies, Brooks writes: "Deep down, we all know that the polarization we are experiencing in our politics today is toxic. We hate the fighting, the insults, the violence and disrespect."

Brooks shares a powerful story of the rare coming together of political opponents. Black Lives Matter protesters found themselves near a group of Trump supporters in Washington, DC. Confrontation was rapidly accelerating into possible violence.

But then the organizer of the rally unexpectedly offered two minutes of time to the leader of Black Lives Matter. And everything changed. See for yourself what happened.

Brooks shares four rules Gottman offered for bringing people back together. Because we are in such a desperate situation, and because these rules can have a dramatic effect on changing things, I'm sharing them here:

"1. When others are upset about politics, listen to them respectfully. Try to understand their point of view before offering your own. Never listen only to rebut.

2. In your interactions with others, particularly in areas of disagreement, adopt the 'five-to-one rule,' which he gives couples. Make sure you offer five positive comments for every criticism.

3. No contempt is ever justified, even if, in the heat of the moment, you think someone deserves it. It is unjustified more often than you know, it is always bad for you, and it will never convince anyone that she is wrong.

4. Go where people disagree with you and learn from them. That means making new friends and seeking out opinions you know you don't agree with. How to act when you get there? See rules 1 to 3!"

Brooks uses the rest of the book to expand upon these rules and share oodles of great advice for our world, and I'd encourage you to get the book and read it carefully for yourself.

How does Our Towns fit into my study of America? James Fallows and Deborah Fallows spend four years and travel 100,000 miles to visit towns and cities across America to see what is going on in our country. Their book is also a book of hope. In every town and city where they find good things going on, they first see people working together for common goals, both economic and social, building up local businesses, building up local communities, building up schools, rethinking the whats and hows but keeping the whys, and taking pride in what is happening. The two Fallowses offer "10 1/2 Signs of Civic Success" as their takeaway from this adventure. Key to a local community's success is that "people work together on practical local possibilities, rather than allowing bitter disagreements to keep them apart...."

So I've ranted long enough, I think, and it's time for me to start working in my local community to make things better. I feel like I have some solid ideas to work from after reading these three books.

I welcome any thoughts you have about my thoughts here; I'd love to open this into a conversation. Let's move forward, shall we? And can we please move forward together? 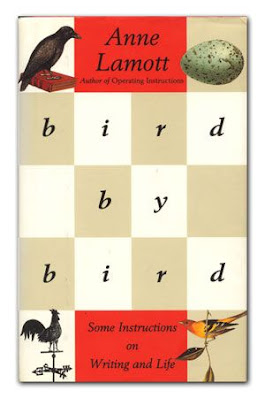