Week 2: (November 8-12) – Book Pairing  with Katie at Doing Dewey: This week, pair up a nonfiction book with a fiction title. It can be a “If you loved this book, read this!” or just two titles that you think would go well together. Maybe it’s a historical novel and you’d like to get the real history by reading a nonfiction version of the story. 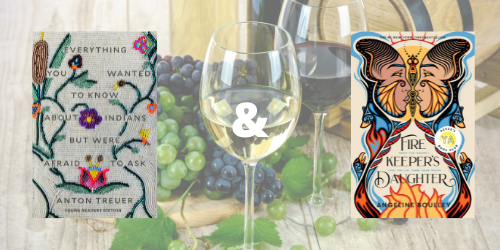 I flew to Chicago a few weeks ago, and I brought these two books along for the trip.

I read Everything You Wanted to Know About Indians But Were Afraid to Ask by Anton Treuer (nonfiction) on the way to Chicago.

I read Firekeeper's Daughter by Angeline Boulley (fiction) on the way home from Chicago.

These two books were a perfect pairing.

"From the acclaimed Ojibwe author and professor Anton Treuer comes an essential book of questions and answers for Native and non-Native young readers alike. Ranging from "Why is there such a fuss about nonnative people wearing Indian costumes for Halloween?" to "Why is it called a 'traditional Indian fry bread taco'?" to "What's it like for natives who don’t look native?" to "Why are Indians so often imagined rather than understood?", and beyond, Everything You Wanted to Know About Indians But Were Afraid to Ask (Young Readers Edition) does exactly what its title says for young readers, in a style consistently thoughtful, personal, and engaging."

"Eighteen-year-old Daunis Fontaine has never quite fit in, both in her hometown and on the nearby Ojibwe reservation. She dreams of a fresh start at college, but when family tragedy strikes, Daunis puts her future on hold to look after her fragile mother. The only bright spot is meeting Jamie, the charming new recruit on her brother Levi’s hockey team.

Yet even as Daunis falls for Jamie, she senses the dashing hockey star is hiding something. Everything comes to light when Daunis witnesses a shocking murder, thrusting her into an FBI investigation of a lethal new drug.Reluctantly, Daunis agrees to go undercover, drawing on her knowledge of chemistry and Ojibwe traditional medicine to track down the source. But the search for truth is more complicated than Daunis imagined, exposing secrets and old scars. At the same time, she grows concerned with an investigation that seems more focused on punishing the offenders than protecting the victims.Now, as the deceptions—and deaths—keep growing, Daunis must learn what it means to be a strong Anishinaabe kwe (Ojibwe woman) and how far she’ll go for her community, even if it tears apart the only world she’s ever known."

What fiction and nonfiction books would make a good pair? Have you read either of these two books?