Week 5: (November 29-December 3) — New to My TBR with Jaymi at The OC Book Girl: It’s been a month full of amazing nonfiction books! Which ones have made it onto your TBR? Be sure to link back to the original blogger who posted about that book!

Here's a list of books that I'd like to look for and read. Thank you to all who shared books. 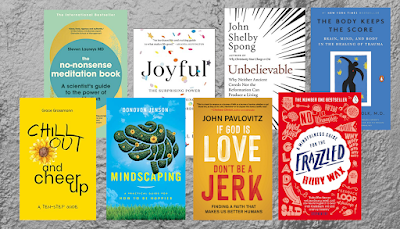 The Body Keeps the Score: Brain, Mind, and Body in the Healing of Trauma by Bessel van der Kolk from Rennie at What's Nonfiction.

The No-Nonsense Meditation Book: A Scientist's Guide to the Power of Meditation by Steven Laureys from Stephanie at Bookfever.

Mindscaping: A Practical Guide For How To Be Happier by Donovon Jenson from Stephanie at Bookfever.

Chill Out and Cheer Up: A Ten-Step Guide by Grace Grossmann from Stephanie at Bookfever.

A Mindfulness Guide for the Frazzled by Ruby Wax from Molly at Silver Button Books.

Joyful: The Surprising Power of Ordinary Things to Create Extraordinary Happiness by Ingrid Fetell Lee from Carol at Reading Ladies.

If God is Love, Don't Be a Jerk: Finding a Faith That Makes Us Better Humans by John Pavlovitz from Bonnie at Bonnie's Books and Lisa at Lisa Notes.

Unbelievable: Why Neither Ancient Creeds Nor the Reformation Can Produce a Living Faith Today by John Shelby Spong from Bonnie's Books. 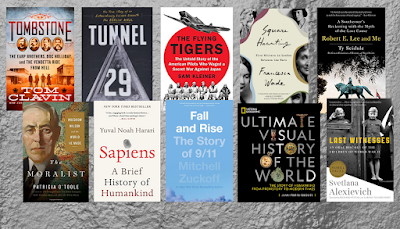 Ultimate Visual History of the World: The Story of Humankind from Prehistory to Modern Times by Jean-Pierre Isbouts from Julie at JulzReads.

Robert E. Lee and Me: A Southerner’s Reckoning with The Myth of the Lost Cause by Ty Seidule, Professor Emeritus of History at West Point from Bryan at Still an Unfinished Person.

Tombstone: The Earp Brothers, Doc Holiday, And the Vendetta Raid from Hell by Tom Clavin from Bryan at Still an Unfinished Person.

The Flying Tigers: The Untold Story of the American Pilots Who Waged the Secret War Against Japan by Sam Kleiner from Bryan at Still an Unfinished Person.

Tunnel 29: The True Story of an Extraordinary Escape Beneath the Berlin Wall by Helena Merriman from Julie at JulzReads and Rennie at What's Nonfiction.

The Moralist: Woodrow Wilson and the World He Made by Patricia O’Toole from Lori at Entering the Enchanted Castle.

Fall and Rise: The Story of 9/11 by Mitchell Zuckoff from Tina at Tina Says.

Sapiens: A Brief History of Humankind by Yuval Noah Harari from Nishita at Nishita's Rants and Raves and Harry at Unsolicited Feedback.

Square Haunting: Five Writers in London Between the Wars from Brona at This Reading Life.

Last Witnesses: An Oral History of the Children of World War II by Svetlana Alexievich from Jen at Introverted Reader. 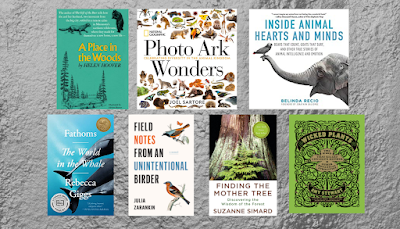 Photo Ark Wonders: Celebrating Diversity in the Animal Kingdom by Joel Sartore from Julie at JulzReads.

Wicked Plants: The Weed that Killed Lincoln's Mother and Other Botanical Atrocities by Amy Stewart from Erin at Cracker Crumb Life.

Fathoms: The World in the Whale by Rebecca Giggs from Kate at booksaremyfavouriteandbest.

Inside Animal Hearts and Minds: Bears That Count, Goats That Surf, and Other True Stories of Animal Intelligence and Emotion by Belinda Recio from Bonnie at Bonnie's Books.

Field Notes from an Unintentional Birder: A Memoir by Julia Zarankin from Jane at Reading, Writing, Working, Playing.

Life’s Edge: The Search for What It Means to Be Alive by Carl Zimmer from Rennie at What's Nonfiction.

A Place in the Woods by Helen Hoover from Jinjer at Intrepid Arkansawyer.

Finding the Mother Tree by Suzanne Simard from Harry at Unsolicited Feedback. 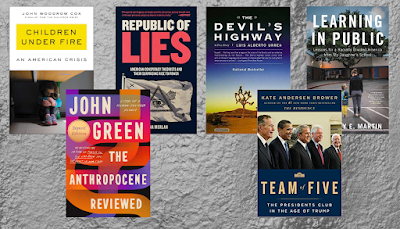 The Devil’s Highway by Luis Alberto Urrea from Iliana at Bookgirl's Nightstand.

Team of Five: The Presidents Club in the Age of Trump by Kate Andersen Brower from Angela at Musings of a Literary Wanderer.

Republic of Lies: American Conspiracy Theorists and Their Surprising Rise to Power by Anna Merlan from Christopher at Plucked from the Stacks.

Children Under Fire: An American Crisis by John Woodrow Cox from Tina at Tina Says.

Learning in Public: Lessons for a Racially Divided America From My Daughter's School by Courtney E. Martin from Tina at Tina Says.

The Anthropocene Reviewed by John Green from Lou at Louloureads and Anne at My Head is Full of Books. 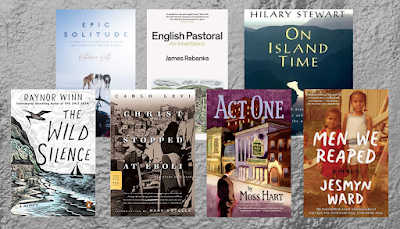 Epic Solitude: The Story of Survival and a Quest for Meaning in the Far North by Katherine Keith from Angela at Musings of a Literary Wanderer.

English Pastoral: An Inheritance by James Rebanks from Marg at Books Please.

On Island Time by Hilary Stewart from Les at Coastal Horizons.

The Wild Silence by Raynor Winn from Karen at Booker Talk.

Men We Reaped: A Memoir by Jesmyn Ward from Jen at Introverted Reader.

Act One by Moss Hart from Lori at Entering the Enchanted Castle.