Readathon: Hour 13: One Beetle Too Many 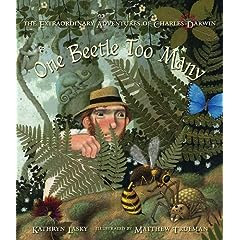 One Beetle Too Many: The Extraordinary Adventures of Charles Darwin by Kathryn Lasky

Charles Darwin was a child who was allowed to explore and he grew up, despite his terrible conflicts with schools, to be a man who explored the world of nature.

Lasky, as she has done in every book, writes the story of Darwin's life brilliantly. Darwin feels as round and human as any fictional character. He comes across as both a student easily bored and a thoughtful observer.

I loved the richness of the writing and the fun of the pictures. A bibliography is included at the end.

“He was told it was something no clergyman should do. That it was a wild scheme. That the boat was unsafe. That the voyage would be useless. That this was a most unsuitable occupation and would ruin his character. And if all that were not enough, he would surely get horribly seasick and furthermore the natives would probably eat him. In spite of all these objections from his father and sisters and aunts and uncles, Charles still wanted to go.”
Posted by Deb Nance at Readerbuzz at 7:28 PM