Readathon: Hour 6: Camping with the President 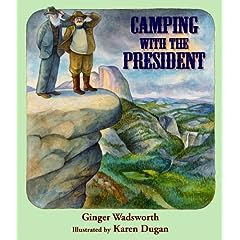 Camping with the President by Ginger Wadsworth

I don’t think I would have ever run across this book if I had not been a Cybil judge and it had not been nominated for best nonfiction picture book. The publisher is a small one and the topic is a small story.

I’m glad I did. It’s a lovely book, with a well-told story and engaging pictures. Camping with the President is the story of a camping trip taken by President Theodore Roosevelt and naturalist John Muir to Yosemite in 1903. They slept on the ground and ate from food prepared over an open fire. They hiked through the mountains and stood next to sequoias and looked at waterfalls.

The book strikes me as exceptionally authoritative. In an author’s note, Wadsworth spends two pages telling how she obtained the information for the book. She has an additional page of source notes. In addition to the story of the camping expedition, she also provides additional information about Roosevelt, Muir, and Yosemite at the end of the book.

My husband and I visited Yosemite two summers ago. It gives me a happy feeling to think that we walked where Roosevelt and Muir once walked, that we saw sites these two men saw. And I am thankful that because of these two men and others like them we had the privilege of doing so.

‘While the President chewed his way through a platter of steak and fried potatoes, Muir spoke of the need to provide “government protection…around every wild grove and forest on the mountains.” He urged Roosevelt to set aside land, including the Mariposa Grove of Big Trees and the state-run Yosemite Valley, which they would visit the next day.

The President had never met anyone who talked as much, or as fast, about the importance of nature. In fact, Muir seemed to live on words, not food! As Roosevelt listened, he heard a noise in the trees above him. Was it a dreaded Secret Service man, guarding him in a tree? He listened again. Then he chuckled. In his notebook, the President wrote “owl.”’