The American Revolution from A to Z 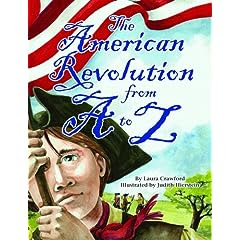 The American Revolution from A to Z by Laura Crawford

Boys at my school are very interested in war. There is very little out there for these boys. I noticed when I was reading all the old Newbery winners that many of the older titles dealt with fighting and war, subjects that appeal to boys. Why are these types of books no longer written about?

This is a simple alphabet book about the Revolutionary War.

Children’s reactions:
This was not a popular choice among the children who previewed the book. A few boys liked the book’s scenes of fighting, but, for the most part, there was a ho-hum reaction. It seems to need an older reader.
Posted by Deb Nance at Readerbuzz at 12:02 PM