John Brown: His Fight for Freedom by John Hendrix 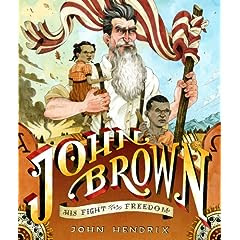 John Brown: His Fight for Freedom by John Hendrix

John Brown led an attack on Harper’s Ferry in an attempt to obtain weaponry for his army, an army he hoped to use to defeat slavery. The attack did not go off as planned and Brown was hung for his efforts.

I’ve always seen Brown as a terrorist, but he is not presented this way in the book; he comes across as a man who deplored slavery, loved God, and desperately wanted to stop slavery in America.

The pictures are fun and bright and add a lot to the book. The text is a bit long winded for younger readers, but it would be perfect for an older group of readers, such as junior high or high school students.

An author’s note explains why Hendrix came to write the book and shows where Hendrix obtained his information. The book also includes a list of sources.

A bite of the book:
“Like a great fuming tornado, John swept across the plains to fight for Kansas. He fought many battles on those windy plains, but it was a dark night along Pottawatomie Creek that made him notorious. John and his sons stormed the houses of five pro-slavery settlers who had been threatening his family and other abolitionists, took the men to the creek, and killed them with broadswords. John’s ruthless tactics spread fear into the hearts of the Border Ruffians and others, but also branded John a crazed madman….”

Children’s comments:
The children, eight first grade students, who previewed this book didn’t really know what to make of it. The story was unfamiliar to them and they really didn’t even know enough about the Civil War or slavery yet to be able to really understand what was going on. The ratings with this group were a mix of 3’s and 1’s, but I imagine that upper elementary students would enjoy it a lot more.
Posted by Deb Nance at Readerbuzz at 11:31 AM